“What Your Local Masjid’s Arabic Instructor Is Not Telling You About Why Most Students Struggle And Fail!”

I have GREAT news for you…

If you’ve ever asked yourself, In spite of dedicating so much time, effort and money, why am I not experiencing the results I was expecting?

And you’ve not received a satisfactory answer, then in this article I’d like to answer this question for you in a way that actually gives you hope and builds your confidence at the same time inshallah.

If you have studied Arabic for any length of time, undoubtedly you have come across these 3 terms: اِسْم [ism], فِعْل [fi’l] and حَرْف [harf].

We want to develop them, and we want a crystal clear understanding of what these 3 are.

When people speak, they speak in sentences. Sentences are made up of phrases…

and phrases are made up of words.

So, you have to know the “word”. Luckily, in Arabic there are only 3 of them. In English there are more. There are 8+ parts of speech in English.

If we wanted to talk about the parts of speech in Arabic, and give definitions of them, we would revisit the ones we know in English.

If you are not familiar with the English parts of speech, that’s fine!

We will spend a few minutes talking about them. This is more productive than directly trying to define the اِسْم [ism], فِعْل [fi’l] and حَرْف [harf], as you will see.

Very briefly, we have: 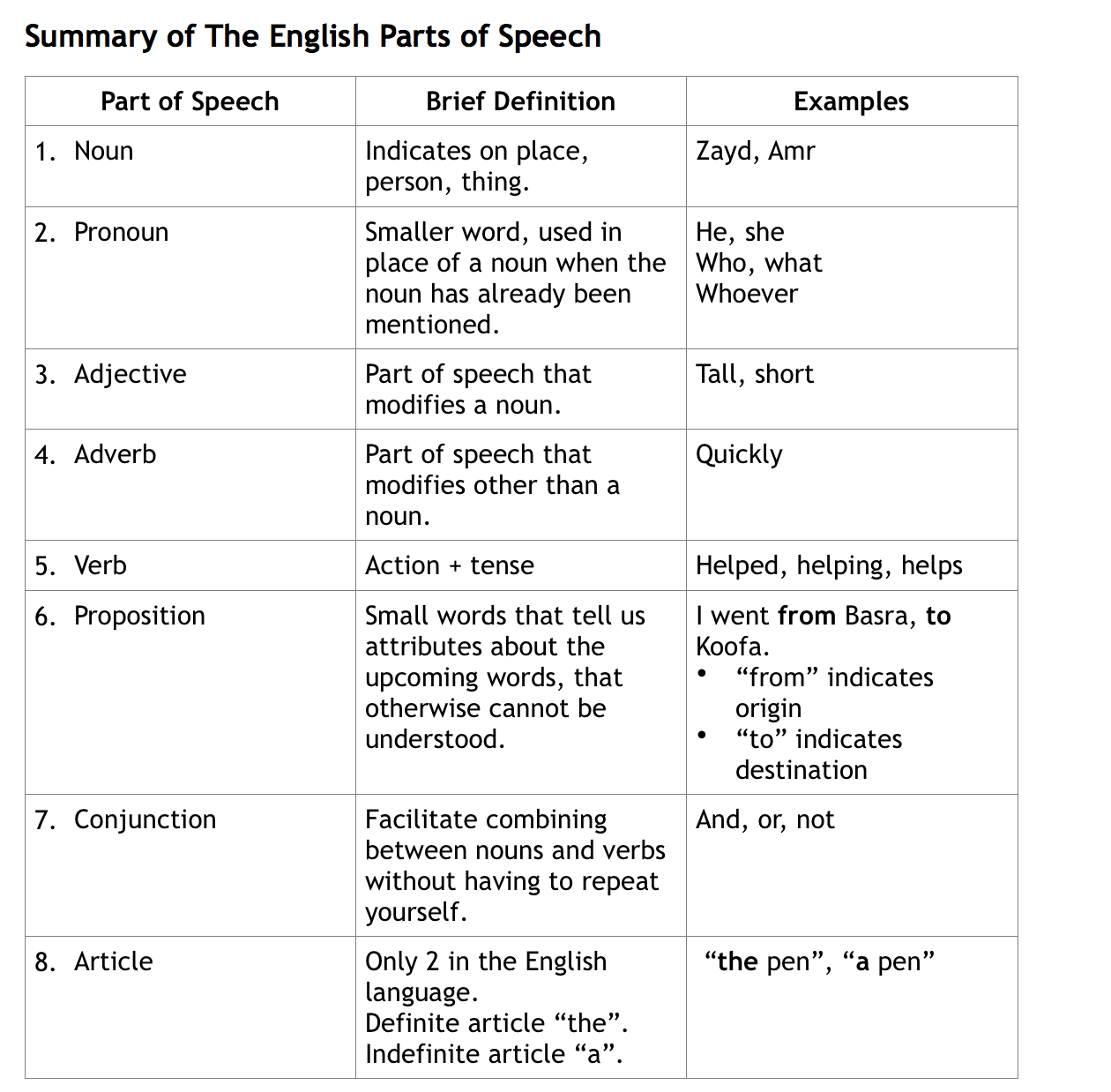 If there are any more parts of speech, then that doesn’t really matter. Our point right now is not to exhaust English grammar. We are using this as a bridge to facilitate our understanding of the Arabic Parts of Speech.

PARTS OF SPEECH IN ARABIC 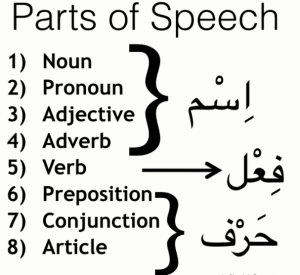 Now that we have a good understanding of what اِسْم [ism], فِعْل [fi’l] and حَرْف [harf] correspond to, it is time to give precise definitions for each of them.

In order to define, we spend a few minutes pondering on the commonalities and the differences.

Without any particular order, we will throw up some prepositions, conjunctions and articles. Then we will look at what is common between all of them. We will try to figure what the element is that is the same in all of them. That would be the حَرْف [harf]. If it doesn’t have that, then it would be the other two (اِسْم [ism] or فِعْل [fi’l]). We would do the same thing with the other two and try to look for a difference there. What is it that distinguishes the verb  from nouns, pronouns, adjectives and adverbs.

We can start by throwing up some prepositions, conjunctions and articles on the screen: 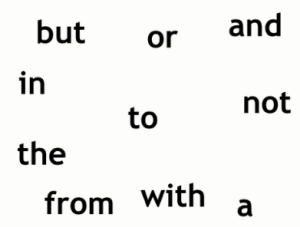 These are all examples of حَرْف [harf]. What do they have in common? Let’s look at their meanings.

If you look at all of them, you have to agree that the commonality is that they all indicate meanings in something else. Because origin is not the attribute of the “from”, it is an attribute of the upcoming word. Like in the example “I went from Basra to Koofa”. “From” is the attribute of “Basra”. If you remove it, the meaning changes, and that is the element that disappears. The meaning would be “I took a tour”.

If it indicates a meaning in itself, then that is the primary ingredient that makes it اِسْم [ism] or فِعْل [fi’l].

Since there is more of them, there is something distinguishing the top 4 (nouns, pronouns, adjectives and adverbs) from the verb. And that is tense.

The noun, pronoun, adjective and adverb indicate meanings in themselves and are empty of tense.

اِسْم [ism] is the Part of Speech in Arabic that indicates a meaning in itself and is not linked to time. Examples:

فِعْل [fi’l] is the part of speech in Arabic that indicates a meaning in itself and is also linked to time. Examples:

حَرْف [harf] is the part of speech in Arabic that does not indicate upon a meaning in itself, but rather in something else. Examples:

So that is it. That is the development of the Parts of Speech.

We did it by surfacing the English Parts of Speech, spending a few minutes on them, and then immediately lining up the Arabic Parts of Speech with the English ones, to try to get a feeling and understanding of what they correspond to. Then we look for the commonalities and differences which then led us to the definitions.

This topic is now totally done. It is done in a way that I don’t think you will forget insha’Allah. If you were to be made to present it I think you would also do it with confidence.

To answer the original question:

In spite of dedicating so much time, effort and money, why am I not experiencing the results I was expecting?

The answer is simple.

It has everything to do with not being aware of the fundamental nature of how the language works. I.e. the approach and method means everything. When you are studying Arabic, as a series of disconnected rules, and long list of words. And you feel that the only way to master the language is to memorize vocabulary and rules, without understanding how the language works, and without appreciating how the Arabic language is different, unique and special, then of course this will overwhelm and disappoint you and not give you the results you are looking for.

It doesn’t matter if you are studying online, or studying in a physical classroom, or if you are studying through a live presentation or whether it is pre-recorded. None of that matters!  The preferred learning style comes later. The approach is the sole factor that determines whether the person gets results or not.

If you feel like this article was helpful, you are a great fit for the free How To Start Understanding Quranic Arabic In 21 Days mini-class I put together for those that are looking to gain traction in their Arabic studies without the stress of having to memorize long lists of vocabulary or disconnected rules.

This training is packed with information and 100% Free.

Perhaps the most important lesson in this new mini-class is the emphasis on the way Arabic is structured, its comprehensiveness and the true reason why Allah azza wa jall chose it as the medium for his final message.

Sign up now by clicking the banner below and filling the short form. I’ll also send you a 3 page “English Grammar Terminology” worksheet.

After over 16 years of teaching, I’ve noticed that it’s not the Arabic that my students have trouble with, but actually, it’s their understanding of English grammar.

So, inshaAllah, just getting this part down will help ensure that you have a solid foundation for learning Arabic.

May Allah reward you for the best of your intentions and grant you barakah in your time and effort.